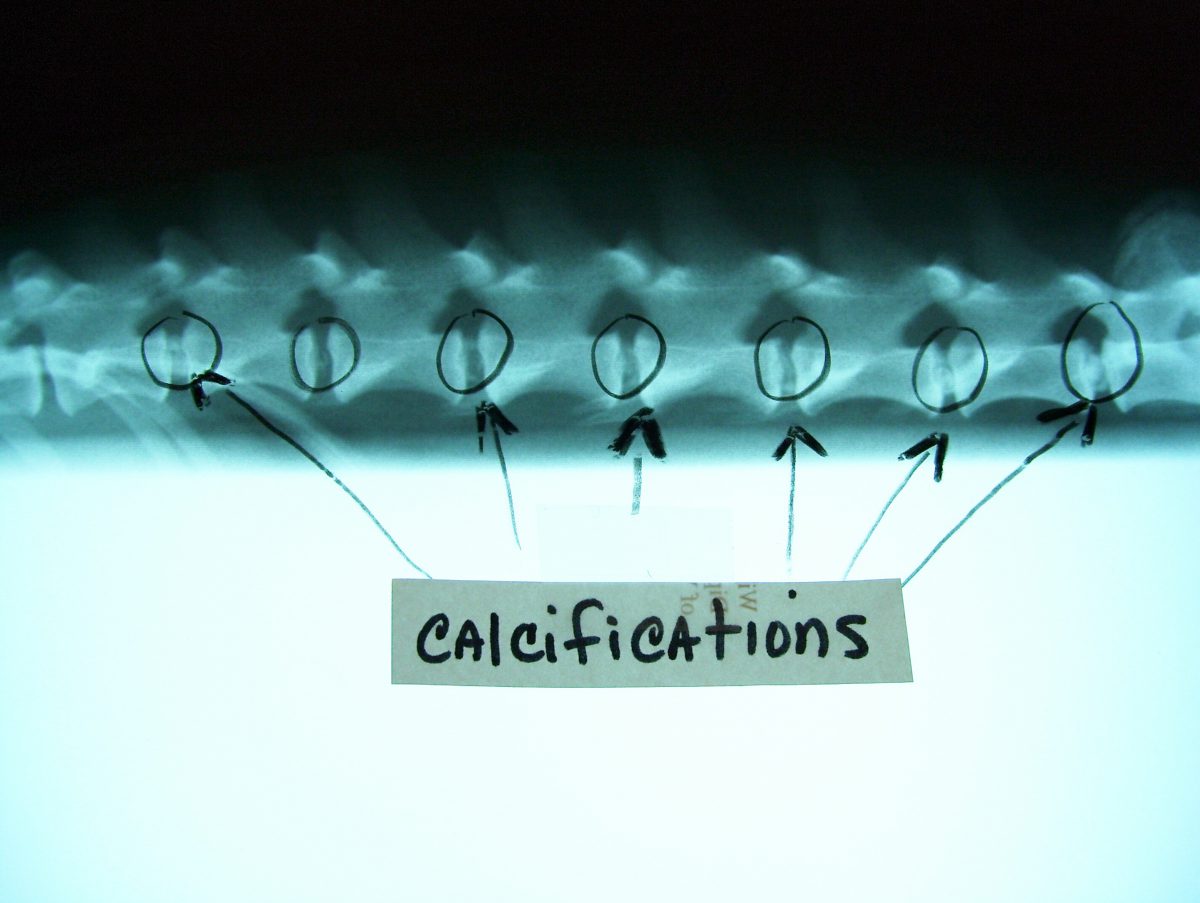 What calcified discs are and what they mean in the Dachshund back
By Laurie Miller, Surgical Vet Tech

Dachshunds are a breed known as Chondrodystrophic. This translates very simply to dwarfism. Dwarf breeds have short, crooked long bones (femur, tibia, humerus, radius/ulna) and their joints tend to age prematurely. The Vertebrae that protect the spinal cord from trauma are covered on either end by cartilage, thereby making them a joint surface. Between each vertebrae lies a little shock absorbing mechanism called an intervertebral disc.

These discs have a tough outer ring called the Annulus fibrosa and this Annulus encapsulates the inner part of the disc which is soft and jelly like. This soft inner ring is called the Nucleus Pulposa.

In a Chondrodystrophic breed such as the Dachshund, there is an abnormal deterioration of this intervertebral disc over the lifetime of the dog. In a normal dog, these discs stay relatively soft and retain their jelly like shock absorbing properties for the life of that dog. However, in the Dachshund, over time these discs may begin to harden and calcify, and this premature hardening can lead very frequently to a disc rupture. A disc rupture occurs when this hardened shell or Annulus begins to weaken due to fissures that form when the disc ages prematurely. This Annulus gives way and the inner, softer Nucleus protrudes and leaks up into the spinal canal.

This leakage of the Nucleus is what is referred to as a disc rupture. The rupture can be severe enough to cause paralysis by damaging the tissues around the spinal cord.

The calcification of this disc material appears as a bony lucency on a radiograph. The hardened disc looks very much like bone due to the calcification. In severe cases, this calcification can actually lead to fusion of the vertebrae.

It is not uncommon to see this bony texture to the discs on Dachshund radiographs. Most of the dogs we radiograph between the ages of 5 and 10 will have these calcifications present between the disc spaces.

Calcified discs do not necessarily mark a ruptured disc

However, calcified discs do not necessarily mean that this particular disc is going to rupture. It only means that the dog may have IVDD and this chalky appearance to the discs is only a “normal” part of the abnormal aging process of such a dog’s discs.

The most common site of a disc rupture in a Dachshund is between T12-13, or the last Thoracic vertebrae. This is the most flexible portion of the back and this is why there is such a high rate of ruptures at this spot.

It is not uncommon to see a Dachshund radiograph with calcified discs from T13 all the way down to L6. (T representing Thoracic and L representing Lumbar) As in the example included in this article. Most of the Dachshunds we x-ray at our clinic will show some stage of calcification on their back films.

The more important thing to look for when examining your dog’s radiographs, is to look for inconsistency in the spacing of the vertebral bodies.

The spaces between the vertebrae should have two parallel sides. There may be calcification between, but if the space is square and the sides parallel, this is most likely NOT the space that is ruptured.

The rupture site may or may not be obvious on a plain (non-myelogram) radiograph even to a trained eye. Visually, disc rupture on a non-myelogram film will usually appear as a narrowing at the top of the disc space. This area of the disc space just below the spinal column will appear narrower than the lower half of the space. This is what you will be looking for when your Veterinarian shows you your pet’s films. More so than the calcified spaces. 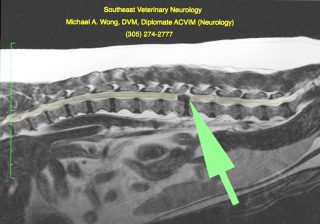 MRI of the spine showing a herniated disc pressing  into the spinal cord.  MRI with permission of Michael Wong, DVM, ACVIM (neurology). MRIs are non-invasive and produce the most detail of advanced imaging options.  MRI shows both hard tissue (vertebrae) and soft tissue (spinal cord, nerve roots, and discs.) This MRI shows a damaged disc. This disc has herniated and is pressuring the spinal cord. 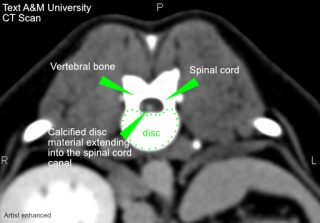 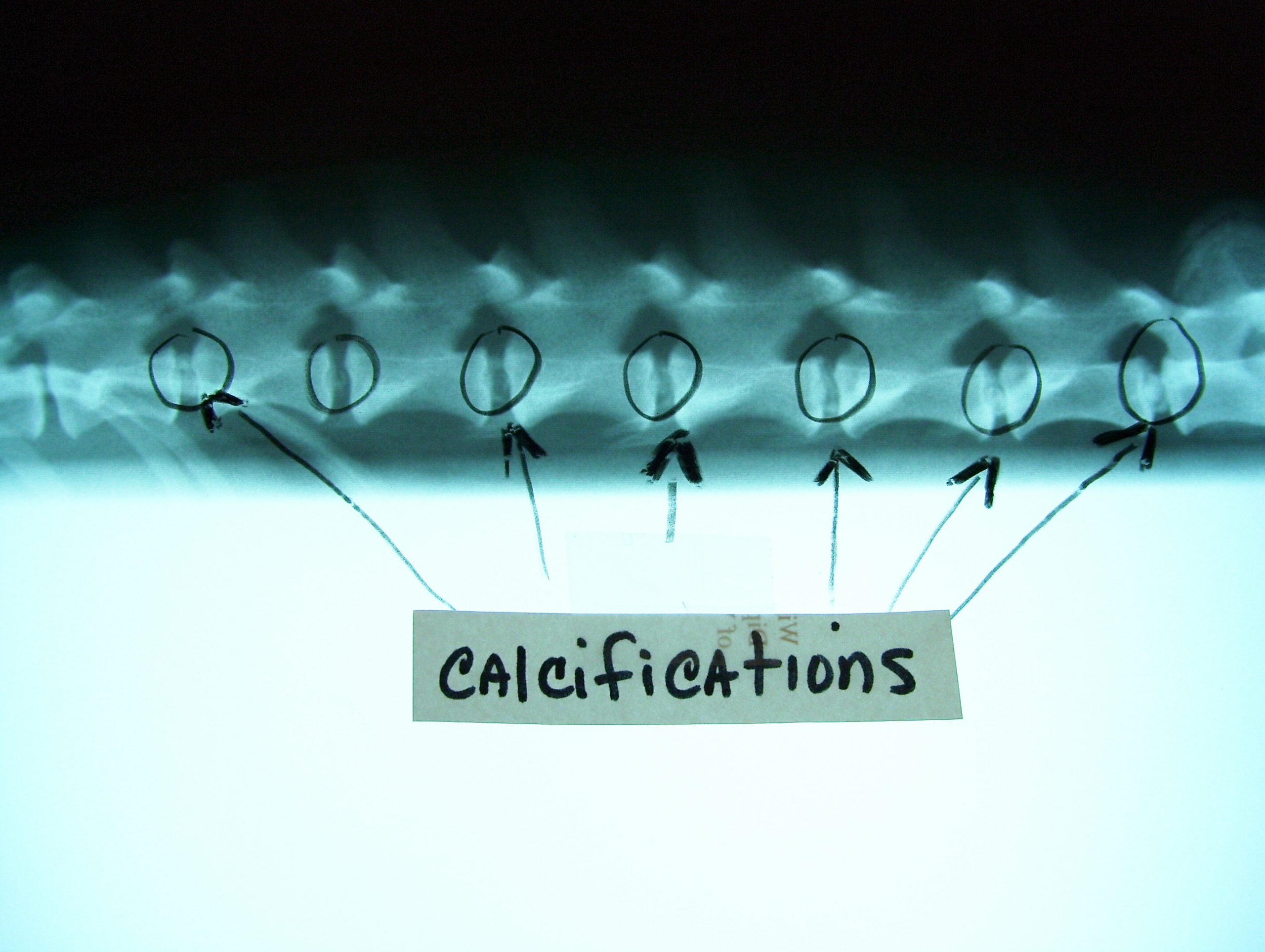 On a normal back x-ray film, the disc spaces between the vertebrae will be black in color with a unique shape above them called the “horsehead”. This “horsehead” appearing space is the area of the vertebrae that houses the spinal cord.

Very often, when a disc ruptures, even if you do not see obvious narrowing of the disc space, you can see bits of white material obscuring this horsehead space. This material is the ruptured disc content that has spread upward into the spinal canal. 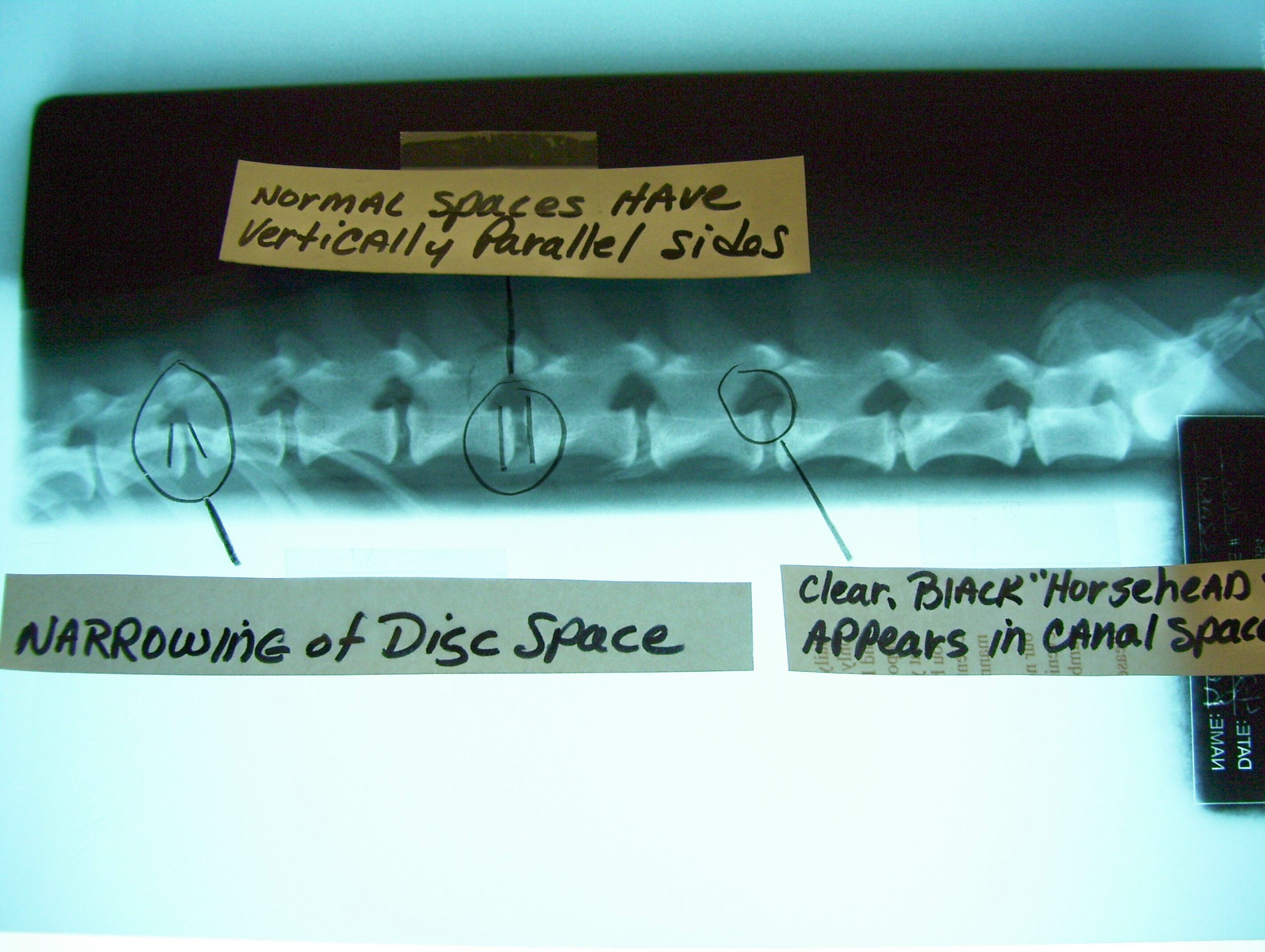 8 year old standard Dachshund. Presented with proprioceptive loss. Most of his disc spaces from T13-L6 are calcified. This is not uncommon on a middle aged Dachshund’s radiographs. 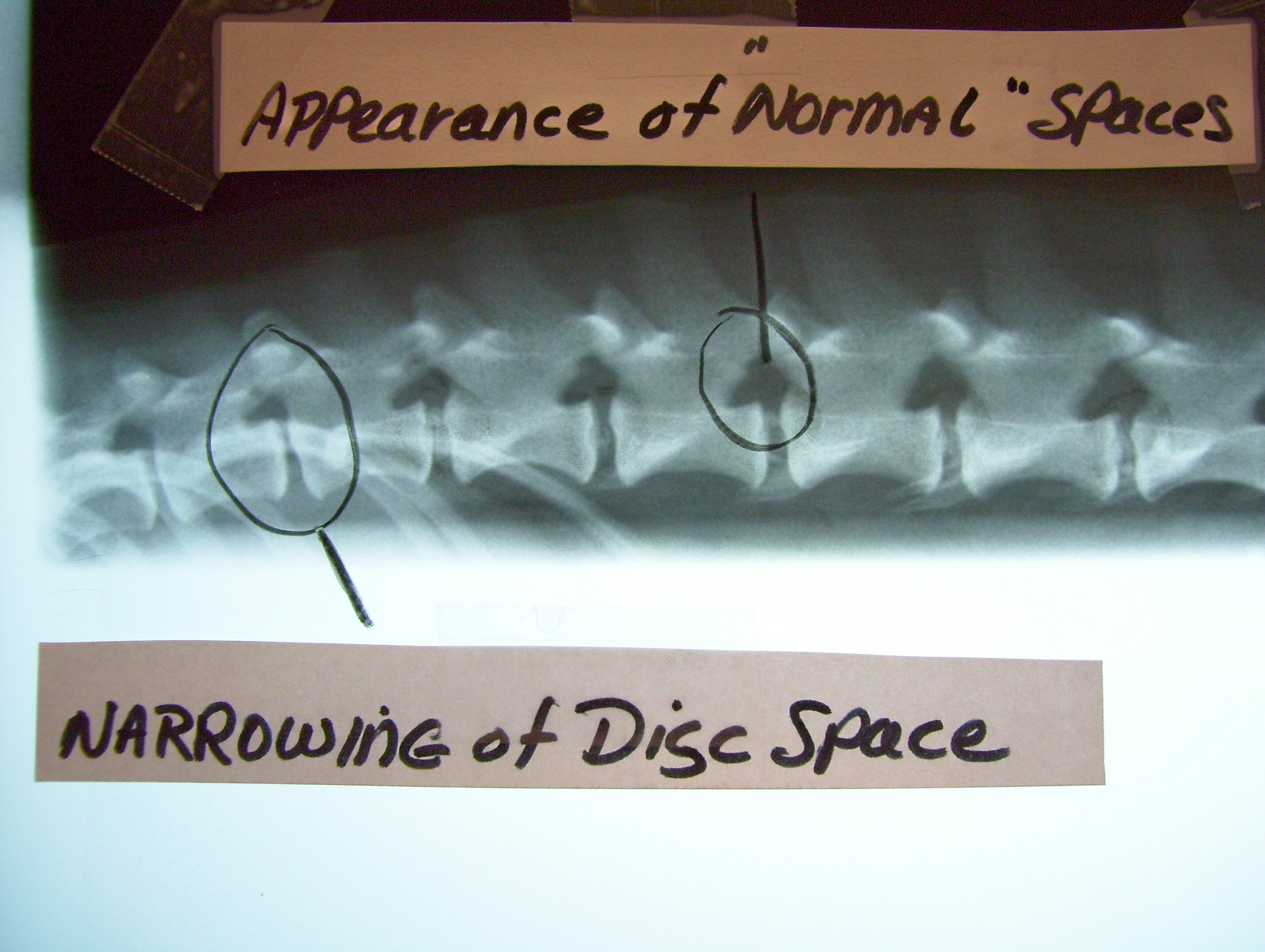 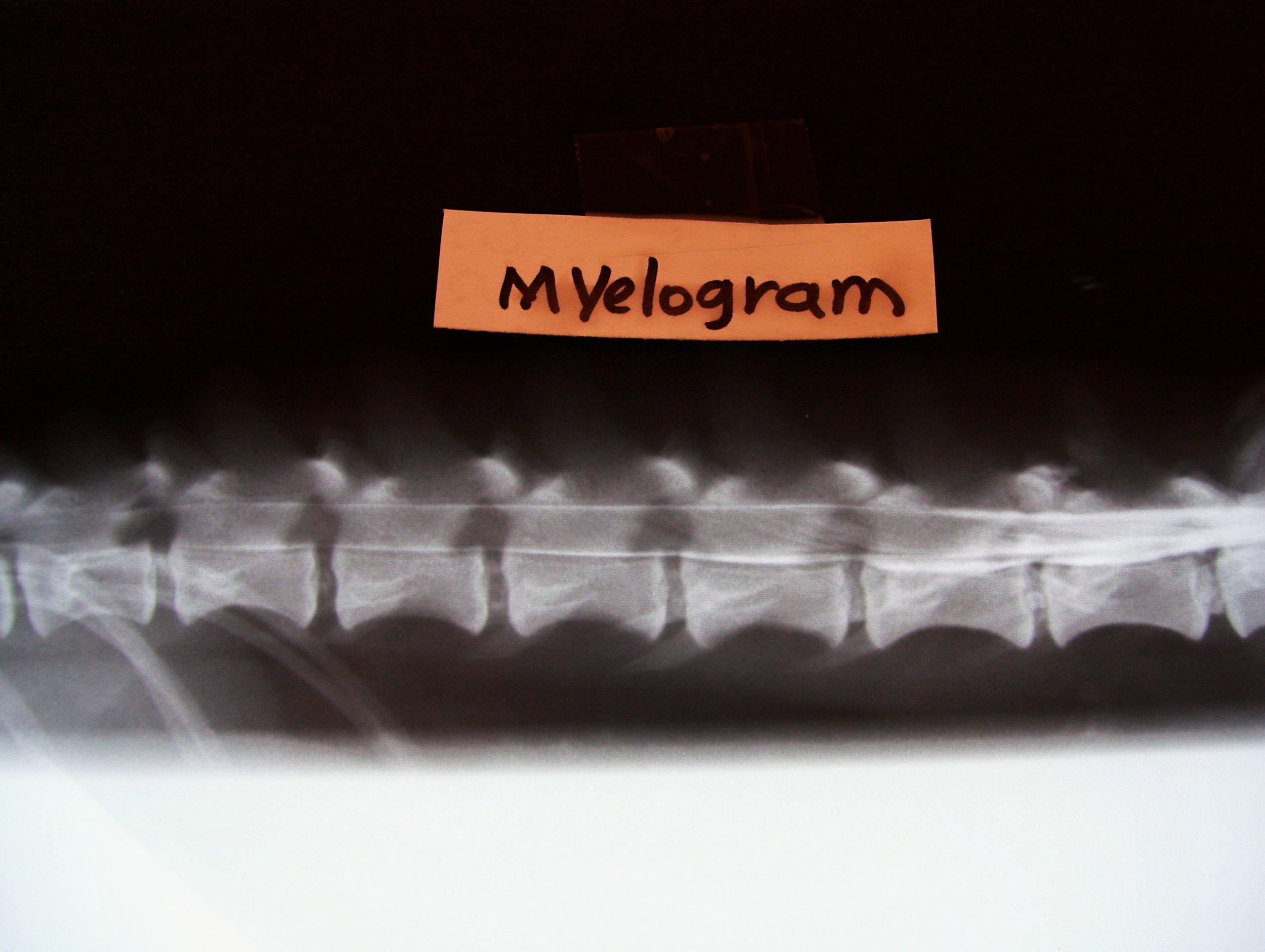 This myelogram image of the same dog is a type of X-ray plus a contrast dye was injected into the spinal cord.  I included this to illustrate how the dye column flows over the normal spaces (as defined by the thin, white lines above and below the cord space). Although this is not a good photo to show this, you can see that the dye column stops just before T 12-13. (at the far left of the photo). This vanishing dye column indicates the area of the rupture. In most dogs, it will actually appear to have a “hump” in it above the rupture. (The white structures on the left side of this photo extending down are ribs.)

This information is presented for educational purposes and as a resource for the dog IVDD community. The coordinators are not veterinarians or health care professionals. Nothing herein should be interpreted as medical advice and all should contact their pet care professionals for advice. The coordinators are not responsible for the substance and content contained herein and do not advocate any particular product, item or position contained herein.