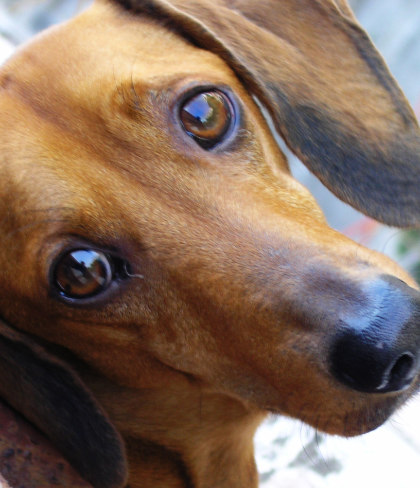 Learn the huge benefits of anti-inflammatory drugs during an IVDD disc episode. What you do not know about these two classes of drugs could harm your dog. 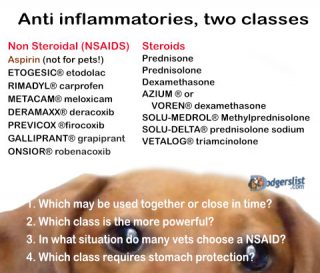 Answers about anti-inflammatory drug use

1. Steroids do not require a wash-out period when switching from one steroid to another. Many vets choose to give a steroid shot and send you  home with steroid pills. However, a 5-7 day washout period is necessary when going from a steroid to an NSAID, an NSAID to a steroid, OR from one NSAID to a different NSAID. Without the 5-7 day washout period, severe GI tract complications can occur. Warnings accompany each medication in the package insert. Look up your dog’s anti-inflammatory package insert.

3. When there are solely pain symptoms with a disc episode and no neurological deterioration, many vets often choose an NSAID. Other vets choose to start with a steroid to avoid dealing with the washout issue should the NSAID end up not being enough to deal with the inflammation.

Mild episodes can have the possibility to progress to more severe cases. Should neuro functions begin to deteriorate, then a vet has a very serious decision to make. Usually, a 5-7 day washout period is ideal to avoid double GI tract jeopardy with a switch from the NSAID class to the steroid class. When nerve function is being lost, the spinal cord takes priority over a washout. With an emergency, the GI tract is double protected with not only continued use of Pepcid AC, but also with the addition of sucralfate.

4. All anti-inflammatories, whether they be from the steroid class or the NSAID class, increase the chance of serious GI toxicity such as bleeding and ulceration. A stomach protector such as Pepcid AC (famotidine) suppresses acid production. Pepcid AC is generally considered a safe, over-the-counter stomach acid suppressor for a healthy dog and is good insurance. Dogs don’t speak up at the first signs of trouble like a person does. By the time we notice black or red blood in the stools, things can quickly go from bleeding ulcers to a life threatening perforated stomach.

SIX THINGS TO KNOW ABOUT ANTI- INFLAMMATORY DRUG USE

A range of anti-inflammatories specially formulated for canines with fewer side effects are now available. The metabolism and dosages of drugs for people are much different for dogs.

Aspirin should not be used with other medications due to its lengthy effect of prolonging bleeding (DO NOT use with other NSAIDS, steroid hormones, or joint supplements). At least a 7-14 day washout period is advisable when going from aspirin to another anti-inflammatory medication. Self-prescribing aspirin for your dog is dangerous, plus it can tie your vet’s hands in using the appropriate meds for a disc episode!

Depending on a dog’s metabolism, 5-7 days must be given for an NSAID to leave the body before it would be safe to move to the more powerful anti-inflammatory class of steroids.

▼ HOW LONG TO USE

It can take anywhere from 7-30 days for a steroid or a non-steroidal to resolve all swollen tissue around the spinal cord.

NSAIDS: At the end of a 7-day or 14-day course plus the stop of pain meds, owners can best assess for pain and alert their vet right away. Pain = another course of NSAID.

STEROIDS: The first tapering down day begins the test for pain. Taper days are no longer working on swelling. Pain meds are also stopped to enable the owner to quickly assess whether there is remaining pain and alert the vet right away. Pain = another course of steroid back up at the “anti inflammatory” level. NOTE: steroid hormones may not be full-stopped; they require tapering off under the supervision of a vet.

When there is loss of neurological functions, the lesser of the anti-inflammatories (NSAIDs) are not usually continued. The most powerful of the anti-inflammatories (steroids) is considered. If the vet deems it an emergency to switch from an NSAID to a steroid due to deteriorating neurological functions, a switch can be made without a 5-7 day washout period with the addition of TWO stomach protectors:

▼ INAPPROPRIATE USE OF NSAIDS WITH STEROIDS

■ All NSAID package inserts carry a similar FDA required warning: “Should not be given with other NSAIDs (for example, aspirin, carprofen, etodolac, deracoxib, meloxicam, or tepoxalin) or corticosteroids (for example, prednisone, cortisone, dexamethasone, or triamcinolone).” Look up the package insert for your dog’s anti-inflammatory.

■ “The primary cause of adverse effects from NSAIDs is incorrect dosing (eg, concurrent use with corticosteroids or another NSAID, changing NSAID without a suitable washout).8 Washout period (dogs, 5–7 days)”2

■ “Let me be crystal clear right from the get-go. A steroid (aka: corticosteroid, glucocorticoid) should rarely be given at the same time as a non-steroidal anti-inflammatory drug (aka: NSAID) prescribed at an anti-inflammatory dose. This is a well-established pharmacologic principle, but for some reason, it is also one I see violated on an almost daily basis. With so many alternatives to help keep patients as comfortable as possible, I’m perpetually flummoxed by this choice of treatment. Thus I’m writing this blog post so pet parents are aware of this important issue and can be proactive advocates for their fur babies.” Christopher G. Byers, DVM, DACVECC, DACVIM (SAIM), CVJ

previousHope and Quality of Life for All

This information is presented for educational purposes and as a resource for the dog IVDD community. The coordinators are not veterinarians or health care professionals. Nothing herein should be interpreted as medical advice and all should contact their pet care professionals for advice. The coordinators are not responsible for the substance and content contained herein and do not advocate any particular product, item or position contained herein.